A common theory that a lot of fans have fun with, is to line up characters of their favorite franchise with the 7 deadly sins, as defined by Dante’s Inferno.  Popular examples include, SpongeBob, Winnie the Pooh, and Willie Wonka. I’m a big fan of this break down of the personality of various characters and categorizing them.  Of course, it seems more and more frowned upon to place unnecessary labels on people, so I’ve decided to categorize 7 popular emotions into the 7 deadly sins. Specifically, the 7 lantern corps powered by 7 different universal emotions.

One thing that has always bothered me about the various lantern corps and their emotional spectrum of Rage (red), Greed (orange), Fear (yellow), Willpower (green), Hope (blue), Compassion (indigo) and Love (violet), is that these 7 emotions do not properly encapsulate everyone.  I have always felt that the way these lantern members are presented, that a lot of people, including myself, fail to see themselves fit into any one category. Each lantern corps is put to such an extreme in their emotional category, that people can only relate to a couple of them.

The members of the Red Lantern Corp are so consumed by rage, their blood is replaced with liquid fire and become a sinister force in the universe.

There is literally only one member of the Orange Lantern Corps because the epitome of avarice means only one being, Larfleeze, holding all the power of the corps.

The Yellow Lantern Corps, or Sinistro Corps, lives to spread fear in the universe, while their mortal enemies, the green lantern corps use their willpower to police it.

The Blue Lantern Corps aren’t very powerful on their own since hope is all but useless without willpower and action. 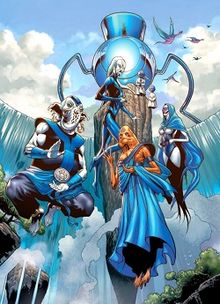 The Indigo Tribe turned out to consist of some of the worst criminals in the universe that were forced to feel the emotions of other beings, and yet they are arguably some of the strongest lanterns because of it.

And the Violet Lanterns, or Star Sapphires, take love to an unhealthy level and is almost exclusively all female.

On the surface, relating to any one of these emotions would be easy, but the way they are presented in DC comics, it becomes a bit difficult to do so.  This is where we will step in by trying to expand the relatability of each corps by matching it to one of the 7 deadly sins. I think it would only be appropriate to start with the classic ROYGBIV order.

It comes as no surprise to anyone that the red lantern corps, whose members are powered by their own rage, represent the capital vice of wrath. Those inflicted with the sin of wrath are vengeful, hateful, and self destructive. Each member of the red lantern corps has a backstory of being personally wronged and enraged to the point that a red rage ring finds them and gives them the power to exact their revenge at the cost of their own life. If a red lantern ever relinquishes their ring, they will die, since the ring literally replaced their blood with boiling rage juice.

An equally obvious placement is Agent Orange, Larfleeze, as the avatar of greed. Those inflicted by the sin of greed have an insatiable need to acquire material possessions.  They will often equate personal property with their own self worth.  Larfleeze is the perfect representative of these traits.  He literally wants to own everything in the universe, including the souls of his enemies and at the same time refuses to share his power with anyone else.

Another individual that was the sole member of a corps for a short time is Sinestro.  Although, in his effort to spread fear throughout the universe, he shared his powers with other fear mongers who became the Sinestro Corps.  The reason he founded the Yellow Lanterns in the first place was to seek revenge on the Green Lanterns after they imprisoned him for forcing the people of his home planet to worship him as a god.  Sinestro desires to be respected and feared by everyone because of his overwhelming envy of those with more power than him.  He craves power and is crazed by it.  When he was disgraced from the Green Lantern Corps and stripped of his power ring, he envied the power they took from him, and created his own corps in mockery of them.  In this way, he is able to spread fear with the help of his recruits, which grants him even more power. Sinestro constantly tries to obtain the same putreach and influence as Green Lanterns.

The Green Lanterns are basically the space police of the DC Universe and although they are protectors and guardians by nature, one of their biggest flaws is their pride.  The Green Lanterns pride themselves on their organization, ideals, efficiency, and power.  They police the universe, even though not every planet or civilization has agreed to their militant intrusion.  It is clear that for this reason alone, the Green Lanterns expect everyone to just be okay with their involvement and interference. The lanterns may serve the citizens of the universe and protect them from evil forces, but at the end of the day they answer to the Guardians of Oa who have a significant amount of unyielding pride in their unofficial rule over the universe. The guardians are often depicted as a stubborn high council that remain rigid in their ideals. They represent the laws of the universe and have the overwhelming power to enforce it.

There is another lantern corps that has a greater amount of power than the Green Lanterns, but ironically, this is only the case when a Green Lantern is close by.  The Blue Lanterns have a very basic power set powered by hope, but in the vicinity of a Green Lantern, their power greatly exceeds that of any other spectrum member.  Hope is a very weak force if there is no willpower to carry it out.  Needless to say, the Blue Lanterns don’t do much of anything on their own and embrace an enlightened monk-like lifestyle.  Since they are mostly unwilling to interfere without the presence of their emerald counterparts, their sin is that of sloth.  Even though this is my personal favorite lantern corps, I am constantly disappointed by their lack of action and it almost seems criminal that we don’t see them in the fray more often.

What is even more criminal is the Indigo Tribe, powered by the emotion, compassion. Literally, most of these guys are criminals. The indigo power source completely dominates their host if they lack any compassion for other living beings.  If the host is already imbued with a capacity for compassion, the indigo power doesn’t seem to mind control the subject.  However, the vast majority of the Indigo Tribe are mind controlled criminals experiencing the emotions of other beings and serving the tribe against their will in retribution of their past crimes.  The ringbearer has little self-control in their  voluntary actions and thus have to be mind controlled and inflicted with the unending desire to experience the emotions of others.  The rings compel them to lust for other’s emotions and to understand them.  Yes, that is correct, I am assigning the Indigo Tribe to the deadly sin of lust instead of the Star Sapphires.

I am willing to bet that you were expecting lust to be assigned to the Star Sapphires, the lantern corps powered by love.  But love is very different from lust.  Love is a powerful bond experienced between two or more organisms while lust is an overwhelming craving for something.  The reality of the violet lanterns is not what someone expects to find when talking about a group of people powered by love.  They are actually known to go to great extremes to ensure that the power of love remains a dominant force in the universe. They will even take new recruits against their will and convert them to their cause.  They believe love to be the dominant force in the universe and are often foiled by their immense overconfidence in their power.  One could say that the power of love consumes them to unhealthy extent. Gluttony, although often associated with the over-consumption of food, can actually be the over-consumption of anything.  The violet light power effectively consumes the consciousness and desires of any willing or unwilling member of the corps. This consumption is particularly fitting when you consider that the entity that embodies the universe’s power of love is an immense, grotesque manifestation known as The Predator. 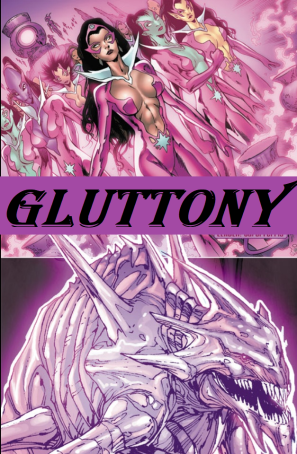 Well there we have it, we have successfully matched the 7 emotional spectrum powers to the 7 deadly sins.  in recap we have:

At the end of the day, there is no right or wrong answer to this kind of theory, but that’s why they are so fun. Hopefully this speculation has successfully given you a greater understanding of the various lantern corps and possibly made it easier to relate to them. I would be interested in hearing how you would place the 7 ring powers into Dante’s 7 sins of man, so leave a comment with your thoughts. Perhaps in the future we can include white rings of life, the black rings of death and even the newest invisible ultraviolet powered rings in some other category convention, but only time will tell, and until then, keep theorizing!

On this episode of FTW, Erik and James explore the fan theories surrounding the Teen Titans franchise.  Join them as they discuss theories such as, what the Teen Titans Go! reboot really is, who Red X could be, why Beast Boy doesn’t age, and even that Lex Luthor bought the world! Theorists, GO!

If you have your own Teen Titans theory or have a suggestion for a future episode, you can reach us at:

Don’t forget to rate and review us on your favorite podcast directory, and as always, thank you for listening!