October is well underway and with it the ritualistic watching of horror films both old and new.  A new horror film has made an appearance on Netflix and it is fantastically gory, hilarious and a hell of a lot of fun.  The best way to describe The Babysitter is that it is the horror equivalent to Home Alone. In fact, it is so similar, that I believe the two movies are not only in the same universe, but the main characters are related.

In the beginning of The Babysitter, we see that our main character, Cole, still needs a babysitter at the age of 12… a very mature 12.  While this doesn’t seem like a big deal on the surface, the movie does make it appear to be unusual and that Cole is too old for said babysitter.  Cole’s father even asks him at one point what his friends think about him still having a babysitter and  Cole promptly responds by saying his friends make fun of him until they see what the babysitter looks like.  So why are the parents more protective over Cole than the other parents in the community?

I believe that the reason the parents are so “overprotective” is because the mother’s family had gone through an ordeal involving a child left alone to defend against two home invaders. 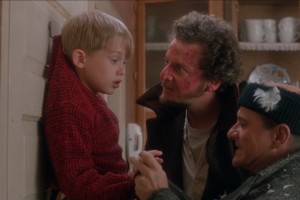 I am talking, of course, about the McCallister family.  This may seem like a purely thematic concept, but is there any evidence? There may not be anything definitive, but there are two points worth considering.

Megan understands what could go wrong when a preteen is left home alone in a giant house and therefore hires a babysitter to watch over him.

This may seem like flimsy evidence but lets think about this another way.  The fight-or-flight response, or the acute stress response, is a physiological reaction that occurs in response to a perceived harmful event, attack, or threat to survival.  This response determines whether the subject would flee in the event of a dangerous situation or turn around and confront the danger.  This response is thought to be hereditary.  During adulthood, we are more likely to overcome our immediate reactions in favor of a more logical choice.  In childhood, we are more susceptible to our initial reaction.  Both Kevin McCallister (age 8) and Cole (age 12) initial reactions are to stay and fight in response to a home invasion danger. This response could be seen to have been inherited where uncle and nephew share similar Macgyver-esque survival instincts.

In summary, I believe Cole from The Babysitter is actually Kevin McCallister’s nephew. Perhaps we won’t know for sure until we see the return of the wet bandits as they attempt to use baby sitting as a cover for their latest crime spree, but only time will tell, and until next time, keep theorizing!